A Treasure in St. Pete

A late December vacation along the Gulf Coast in Central Florida can be dicey between the unpredictable weather and the throngs of holiday shoppers looking for those special last minute gifts. What’s not a gamble this time of year are the gorgeous vistas that make the St. Pete and Clearwater beaches a definite must-see for any vacationing family.

The House That Ruth Built?

Tucked away on a quiet beach access road right off of Gulf Boulevard on Treasure Island is a beach bungalow we called “home” for four days this December.  The house is listed as the “Award Winning Beach House” on several vacation rental sites.  According to the sites, the renovated house won the Treasure Island beautification award in 2004.  The original beach house was built sometime in the 1920s.  In 2003, three friends bought the rundown structure with the goal of restoring it for family getaways.  You can see a video of their renovation efforts on HGTV’s Generation Renovation (see link below).

The restored house is as good as advertised, even six years later.  You can compare our slide show with pictures from the above rental site.  (You will have to excuse our mess.) According to local legend, Babe Ruth actually used this house during Yankee spring training in the late 1920s and 1930s.  However, no one has been able to prove the Babe’s ownership. Nevertheless, it’s fun to think that this comfortable, accommodating home might have been inhabited by Yankee Greats from very long ago. 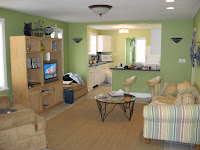 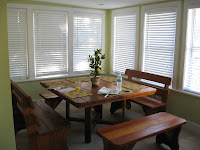 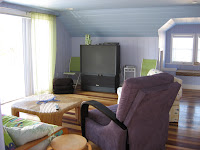 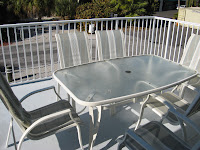 Treasure Island is a typical St. Pete beach town, and that’s what makes it such a great destination to hang out and have some laid-back fun.  The beaches are wide and clean with plenty of room to toss a football or search for sand dollars (one of our favorite activities).  While our place was not directly on the beach, we only had a few steps from our front door to the boardwalk.

Along Gulf Boulevard, Treasure Island consists of all those typical tourist haunts that we both love and loathe.  (How many ice cream places can you have in a three-square block area?)  We’ll touch on eating places in a moment, but there is a good variety of eateries with reasonable prices.

John’s Pass separates Treasure Island from Madeira Beach, which allows access to Little Bird Key and Bayou Bay.  As you head north and cross the bridge to Madeira Beach, directly on your right is John’s Pass Village and Boardwalk, a collection of art and tourist shops and an assortment of bars and restaurants.  It’s a good place to browse and take a break from the beach.  Most of the shops, however, contain those typical tourist staples: over-priced designer brands (shoes, hats, handbags) or tacky tourist gear (hats, t-shirts, posters).  The day we visited John’s Pass the weather had begun to warm up, and it was relaxing to sit out on the water and watch the pelicans lounging in the sun.

As any parent with teenagers knows, food – in large quantities – is an essential part of daily life.  This fact does not simply change because you are on vacation.  Although our beach house had a full kitchen, we also ventured out to the array of restaurants along Gulf Boulevard.  One of our favorite places was the VIP Lounge located across the street from the Thunderbird Beach Resort.  Yes, the VIP Lounge is a small, cramped bar.  But it has some of the best Mexican food on the eastern side of the Gulf of Mexico.  Note:  Although the VIP looks and feels like a typical sports bar, the atmosphere was relaxed and smoke-free.

During your stay in Treasure Island, you have to visit Caddy’s on the south-end of the beach. This most typical of beach-front bar restaurants has good food, great entertainment, and gorgeous views of Gulf sunsets. Obviously the crowds are much smaller in December, but Caddy’s does its best to make you feel like you’re with family during the holidays.

Another reason to like Caddy’s is they have a great sense of humor. As you probably already know, sea birds can be a nuisance,

and the birds flocking
around Caddy’s are no exception.
The staff does not
tolerate “bird lovers,” whether
they are paying customers or not.

Finally, on our last night at Treasure Island we let the kids decide what type of food they wanted.  Of course “pizza” was the overwhelming choice.  We ate at Gigi’s Italian Restaurant also located close to the Thunderbird, and it was excellent.  Some of the best New York-style pizza we’ve ever had!

Although our visit was short – only four days – we truly enjoyed all that Treasure Island had to offer.  Our youngest definitely did not want to leave the beach.  Even in late December, the beach is still a great place to relax and recharge.  We were ready to go home to celebrate Christmas, but we already miss the open skies and endless waves.