We Have Met the Enemy and They Are Us!

Also, please make sure you leave your name or sign-in somewhere in your comment.  Thanks.
Writer’s Note – I’ll continue to update my blog on a periodic basis.  No set schedule.  So, I want to thank everyone who continues to stop by and check out my blog. Please leave a comment or message; I’d love to hear from you.
Summer 2016 – As we all know, most of this year will be taken up with the presidential election campaign, and, as we have seen thus far, this campaign season is anything but typical.  Here we are in mid-summer and there have been enough headaches and head-scratchers to last for three or four presidential elections.  Right now, everyone is worn out…tired…maybe even exhausted – and it’s not even close to Labor Day!

And that’s putting it politely!  Most of the time these interactions immediately become “Trump’s a jerk,” or “Hillary’s a liar” positions that will not ever change under any circumstances.  So, we yell at one another – mostly through the Internet (sometimes, in person) – and never truly discuss why we’re so angry and frustrated.  We never try to address why one group feels the way they do.  And we’re certainly not respectful of other folks’ opinions or their right to express them.

It’s not just one side versus another…not one party out-of-touch…or one candidate being a bully.  It’s all of them and more importantly – ALL OF US!  And that includes me.  This is going to be a very long four months and a very, very long four years – regardless of who wins.  I don’t think I’ve ever seen people so mad.  It’s actually scary.  Throw in police shootings, the Orlando nightclub massacre, and Black Lives Matter demonstrations, and you’ve got truly treacherous times in America.

Yet, this is OUR country.  Our AMERICA…our home.  We should treat each other like we treat visitors to our own home. Courtesy…empathy…respect…understanding…helpfulness – these are things we would do (should do) when we have guests in our home. 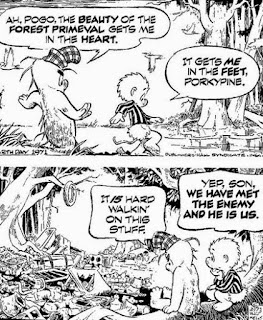 Like the cliche – He is his own worst enemy – we need to remember that we all share this great big country that we call home.  And we’ll eventually destroy this home if we don’t learn to temper our anger and realize that what makes America great is that everyone has a voice.

I think it’s only fitting that we remind ourselves that our biggest demons come from inside our own hearts and it takes true strength to keep those demons from tearing us apart.